Shavkat Mirziyoyev visits an industrial company in Tashkent
The project of the Orient Ceramics enterprise was presented to the head of our state in 2017 during his trip to the Chilanzar district of the capital.

Shavkat Mirziyoyev: Uzbek language is a symbol of our national identity and independence, a grand spiritual value
In the International Congress Center that opened its doors recently in Tashkent City, a festive occasion took place on October 21 in tribute to the thirtieth anniversary of granting the Uzbek the status of state language.

President Shavkat Mirziyoyev’s speech at the Independence Day central festive event in Tashkent
Twenty-eight years ago, the First President of the country, Islam Abduganievich Karimov, announced the state independence of Uzbekistan to our people and the world community. Within a fairly brief historical period, Uzbekistan has passed a difficult and at the same time glorious path of independent development.

The President visits Mustaqillik Square
Uzbekistan has started celebrating the twenty-eighth anniversary of national independence. Today, President Shavkat Mirziyoyev has thus visited the Mustaqillik (Independence) Square in the heart of Tashkent and laid flowers at the Monument of Independence and Humanism...

Honoring the memory of patriots
President of the Republic of Uzbekistan Shavkat Mirziyoyev visited the Shahidlar Khotirasi (Memory of Victims) Alley in Tashkent in the early hours of August 31 and took part in the commemoration ceremony of repression victims.

Priorities identified for practical cooperation
Presidents Shavkat Mirziyoyev and Alexander Lukashenko continued negotiations in an extended format with the participation of official delegations of the two countries. Uzbek-Swedish “round table” at the ISRS

On January 31 the ISRS held a joint round table on “Regional Cooperation in Central Asia and the Development of Uzbek-Swedish Relations” with the parliamentary delegation led by the First Deputy Speaker of the Riksdag of the Kingdom of Sweden Åsa Lindestam. On the eve, a round table was organized in Tashkent by the Institute of Strategic and Interregional Studies under the President of the Republic of Uzbekistan, the Information and Analytical Center for International Relations and the Development Strategy Center, Dunyo news agency reported. 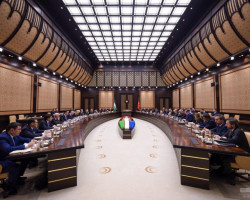 Official delegations of Uzbekistan and Turkey have convened today in Ankara for the first session of the Strategic Cooperation Council.